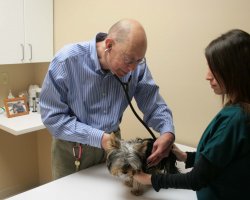 Dr. Freiman was born and raised in New York. He earned his undergraduate degree at New York University. In 1970 he graduated from the School of Veterinary Medicine, University of Pennsylvania. After moving to Connecticut, he founded Apple Valley Veterinarians in 1972. Dr. Freiman’s primary responsibilities at Apple Valley are medicine and soft tissue surgery. 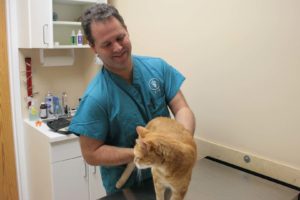 Born and raised in Connecticut, Eric performed his undergraduate studies at the University of Connecticut. He then attended Tufts University School of Veterinary Medicine where he graduated in 1991. Returning to Connecticut, Eric practiced around the state, including Newington, Glastonbury, and Newtown, before making a home for his family in Southington. Dr. Rothstein has been a practicing partner at Apple Valley Veterinarians, LLC since 1998. Medicine and orthopedic surgery are his primary responsibilities. In his leisure time, Eric enjoys spending time with his family and pets, skiing, and golfing. 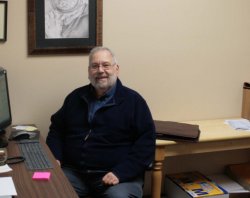 Dr. Douglas graduated from the University of Pennsylvania and obtained his degree as a Doctor of Veterinary Medicine in 1970. He practiced at Wright Veterinary Medicine Center in Bethlehem, PA from 1970 to 1975 and joined Dr. Freiman at Apple Valley Veterinarians in 1975. He has previously served on the Water Pollution Control Authority in Cheshire. Dr. Douglas serves as the client- hospital relations liaison and is available daily to answer your questions.

Spanish
Accessibility by WAH
Call Us Text Us